These Violent Roots by Nicole Williams 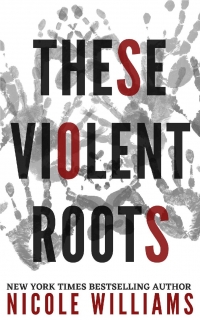 From New York Times and USA Today bestselling author Nicole Williams:
Grace Wolff spends her days fighting monsters, and her nights hiding from her own. As a public prosecutor in the sexual crimes unit, she knows more about rapists, pedophiles, and deviants than most people dare to consider.

Dr. Noah Wolff is as acquainted with monsters as his wife. While Grace dedicates her career to putting violent offenders away, Noah is more interested in rehabilitating them. A renowned psychiatrist specializing in sexual deviance, he counsels a burgeoning number of court-appointed patients wrestling with evil in its darkest form.

When Grace discovers a long line of pedophile suicides have been murders in disguise, she is duty-bound to aid in the investigation. But in her quest to track down the killer, Grace faces an ethical impasse. As a steward of the law, she has an obligation to seek justice for the murders. As a human being, she accepts that “innocent until proven guilty” is laden with loopholes criminals slip through too easily, and too often.

As she hunts the hunter, Grace is forced to acknowledge a complicated truth. To defeat the swell of monsters preying upon humanity’s most innocent, one must become a monster themselves.