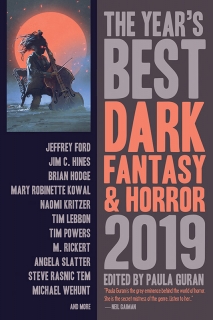 The supernatural, the surreal, and the all-too real . . . tales of the dark. Such stories have always fascinated us, and modern authors carry on the disquieting traditions of the past while inventing imaginative new ways to unsettle us. Chosen from a wide variety of venues, these stories are as eclectic and varied as shadows. This volume of 2019’s best dark fantasy and horror offers more than five hundred pages of tales from some of today’s finest writers of the fantastique-sure to delight as well as disturb . . .

The Thing About Ghost Stories by Naomi Kritzer
When We Fall, We Forget by Angela Slatter
The Crow Knight by Bonnie Jo Stufflebeam
True Crime by M. Rickert
Every Good-Bye Ain’t Gone by Eden Royce
Rust and Bone by Mary Robinette Kowal
The Black God’s Drums by P. Djèlí Clark
Raining Street by J. S. Breukelaar
Big Mother by Anya Ow
Hainted by Ashley Blooms
The Governor by Tim Powers
Down Where Sound Comes Blunt by G. V. Anderson
And Yet by A. T. Greenblatt
HONEY by Valya Dudycz Lupescu
Sour Milk Girls by Erin Roberts
Four Revelations from the Rusalka Ball by Cassandra Khaw
Sick Cats in Small Spaces by Kaaron Warren
He Sings of Salt and Wormwood by Brian Hodge
Second to the Left, and Straight On by Jim C. Hines
Thanatrauma by Steve Rasnic Tem
Faint Voices, Increasingly Desperate by Anya Johanna DeNiro
The Empyrean Light by Gregory Norman Bossert
Big, Dark Hole by Jeffrey Ford
Just Another Love Song by Kat Howard
Tom is in the Attic by Robert Shearman
In the End, It Always Turns Out the Same by A. C. Wise
The Pine Arch Collection by Michael Wehunt
In This Twilight by Simon Strantzas
A Man Walking His Dog by Tim Lebbon
Asphalt, River, Mother, Child by Isabel Yap
Fish Hooks by Kit Power
Blood and Smoke, Vinegar and Ashes by D. P. Watt