The Wonder Test by Michelle Richmond 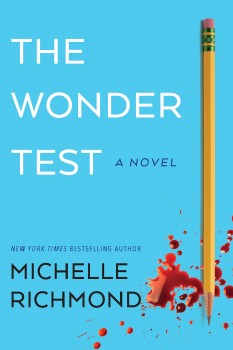 A widowed FBI agent grows suspicious of her son’s new school in this thriller by the New York Times bestselling author of The Marriage Pact.

Lina is on leave from her job in New York at the FBI in order to clean out her father’s home in Silicon Valley. As though letting go of her father isn’t hard enough, Lina has also recently lost her husband in a freak traffic accident. Still reeling, she and her teenage son Rory must make their way through this strange new town and the high school around which it all seems to revolve. Rory soon starts coming home with reports of the upcoming “Wonder Test,” a general aptitude assessment that appears increasingly inane, and Lina is shaken out of her grief by a sense that something is amiss in Hillsborough.

When she discovers that a student disappeared last year and was found weeks later walking on a beach, shaved and traumatized, Lina can’t help but be sucked into an impromptu investigation. Another kidnapping hits closer to home and reveals a sinister link between the Wonder Test and the rampant wealth of Silicon Valley’s elite. A searing view of a culture that puts the wellbeing of children at risk for advancement and prestige, and a captivating story of the lengths a mother will go for her son, this is The Wonder Test.