The Woman on Mulberry Lane by Emmy Ellis 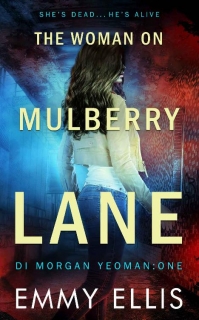 DI Morgan Yeoman has hassle at home and hassle at work. He doesn’t get on with his wife, and a woman has turned up dead down the alley beside Halfway House. Add a prickly team member and his DS always turning up late for work, and Morgan isn’t a happy chap.

Another deceased woman is found, and it’s clear the two are linked. They’re friends, but what connects them in death? A third murder is a little too close to home, and Morgan makes a decision that could cost him his job if he’s caught.
A gang of kids back in the past hold the key to understanding the puzzle, plus a man just released from prison who was put away for murdering a teenager.

Who killed Jacob Everson?
Why are the gang members being picked off one by one?
And will Morgan lose the plot when a shocking discovery comes to light?
Take a walk down Mulberry Lane, a street where secrets can no longer remain buried.