The Woman Inside by Anna-Lou Weatherley 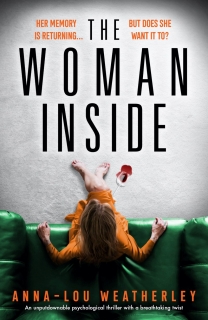 Daisey Garrett wakes up in a hospital bed. She remembers her boyfriend has left her for another woman, but she doesn’t remember what happened to her the night she was attacked in her own home.
Daisey shouldn’t be alive but against all odds, she’s survived an ordeal most would never recover from. But Daisey’s mind is broken. She’s on edge, drinking too much and, despite the painful breakup, finds herself in bed with her ex, Luke. And while she desperately tries to keep herself together, she can’t shake the feeling that she is being watched.

Yet the missing pieces of that fateful summer night are beginning to surface…
The lies she told the police.
The lies Luke told her.

Daisey’s memory is flickering like a faulty light bulb, flashing with images just out of reach. She can’t remember. She mustn’t.
An absolutely gripping, addictive page-turner, The Woman Inside takes you within the tangled mess of people’s lives and the dark secrets they hold close. Perfect for fans of Gone Girl, Before I Go to Sleep and The Wife Between Us.