The Woman in the Wood by M.K. Hill 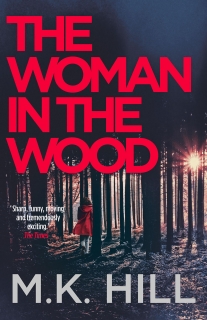 Three years ago, Danny ‘Abs’ Cruikshank, star of reality show Laid in Essex!, was living the dream. But on the night of the party, everything changed.

It was supposed to be an intimate weekend gathering, just a few close friends in a remote cottage in Wales. But after a night of heavy drinking in the village pub, a local girl was reported missing – and never seen again. Abs and his friends had been the last to see her alive.

No-one was ever charged, but the controversy destroyed Abs’s career. And now one of his mates has been murdered…

DI Sasha Dawson and her team must race against the clock to find the killer before they strike again – but first she must discover what happened to Rhiannon Jenkins on the night she vanished. Will the truth set Abs free? Or bury him?