The Wizard Knight by Gene Wolfe 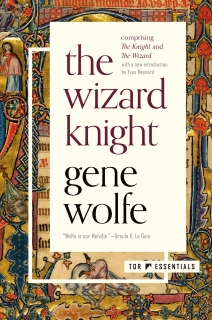 A novel in two volumes, The Wizard Knight is in the rare company of works of fantasy like The Once and Future King, or The Wizard of Earthsea, that drink directly from the wellspring of myth. Now it appears in a single-volume edition for the first time.

A young man in his teens is transported from our world to a magical realm consisting of seven levels of reality. Transformed by magic into a grown man of heroic proportions, he takes the name Sir Able of the High Heart and sets out on a quest to find the sword that has been promised to him, the blade that will help him fulfill his ambition to become a true hero—a true knight.

Inside, however, Sir Able remains a boy, and he must grow in every sense to survive what lies ahead…