The Voter File by David Pepper 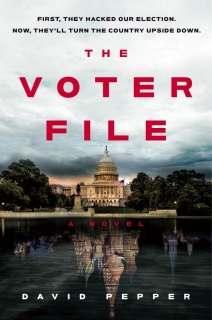 A twisty, one-step-ahead-of-the-headlines political thriller featuring a rogue reporter who investigates election meddling of epic proportions written by the ultimate insider.
Investigative reporter Jack Sharpe is down to his last chance. Fired from his high-profile gig with a national news channel, his only lead is a phone full of messages from a grad student named Tori Justice, who swears she’s observed an impossible result in a local election. Sharpe is sure she’s mistaken…but what if she isn’t?

Sharpe learns that the most important tool in any election is the voter file: the database that keeps track of all voters in a district, and shapes a campaign’s game plan for victory. If one person were to gain control of an entire party’s voter file, they could manipulate the outcome of virtually every election in America. Sharpe discovers this has happened–and that the person behind the hack is determined to turn American politics upside down.

The more he digs, the more Sharpe is forced to question the values–and viability–of the country he loves and a president he admired. And soon it becomes clear that not just his career is in jeopardy…so is his life.