The Vanished Seas by Catherine Asaro 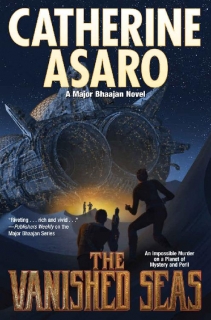 SURVIVE THE CITY OF CRIES

Bhaajan grew up in the Undercity, a community hidden in the ruins buried beneath the glittering City of Cries. Caught between the astonishing beauty and crushing poverty of that life, and caught by wanderlust, she enlisted in the military. Now retired, Major Bhaajan is a private investigator who solves cases for the House of Majda, a powerful royal family centered in Cries. The powerful elite of the City of Cries are disappearing, and only Bhaajan, who grew up in the Undercity, can find them—if she isn’t murdered first.