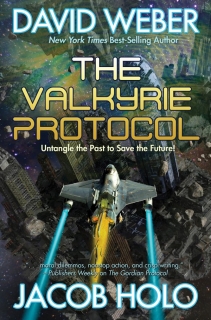 Agent Raibert Kaminski and the crew of the Transtemporal Vehicle Kleio have stumbled across a temporal implosion that has claimed two whole universes, and neither Raibert nor his crew can ­ figure out what caused this calamity, or how to stop its spread. Meanwhile, old colleagues of Raibert’s from the Antiquities Rescue Trust, together with a version of Samuel Pepys transplanted from the 17th century into the 30th, have proposed an expedition into the past. The goal? To branch the timeline by preventing the Plague of Justinian, one of the worst pandemics in human history. And on a multidimensional level, governmental entity SysGov’s multiverse neighbor, the xenophobic Admin, is stirring. While their ambassadors put on a friendly show, the Admin is amassing a fleet of advanced, heavily armed time machines—with SysGov firmly in the crosshairs.

In the midst of the temporal turmoil, time is running out for Raibert and his team to save the rest of the known universes from ceasing to exist. Navigating the paradoxes of time can be a killer task—especially when dogged by those who seek your destruction at every turn. But this isn’t the ­ first Time Rodeo for the crew of the Kleio, and they won’t go down without a ­ fight—no matter where—or when—the threat to the multiverse arises!