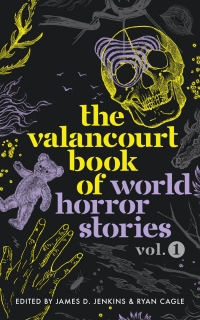 What if there were a whole world of great horror fiction out there you didn’t know anything about, written by authors in distant lands and in foreign languages, outstanding horror stories you had no access to, written in languages you couldn’t read? For an avid horror fan, what could be more horrifying than that?
For this groundbreaking volume, the first of its kind, the editors of Valancourt Books have scoured the world, reading horror stories from dozens of countries in nearly twenty languages, to find some of the best contemporary international horror stories. All the foreign-language stories in this book appear here in English for the first time, while the English-language entries from countries like the Philippines are appearing in print in the U.S. for the first time.