The Unsound Sister by Lelita Baldock 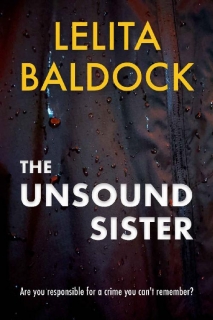 Are you responsible for a crime you can’t remember?
Grant Huxley is dead. Found brutally stabbed in his hotel room in Beesands. His estranged wife Eloise Lane-Huxley and her sister June Lane are discovered at their home in Torcross, covered in blood and in possession of a pair of bloody crafting scissors.

DS Robert Fields interviews the sisters. Despite having no memory of the events surrounding the murder of her husband, Eloise is charged with murder.
Young and ambitious defense lawyer Harriet Bell is hired to defend Eloise. She quickly ascertains that a defence of Not Guilty by Reason of Insanity – Automatism is the best chance of supporting her client.
Interviewing family and witnesses, Harriet uncovers secrets and hidden scandals and begins to doubt her client’s guilt. Against the challenge of her own family history she works to uncover the truth.
Who really killed Grant Huxley?