The Unseen and The Unwilling by Kathleen Rapp 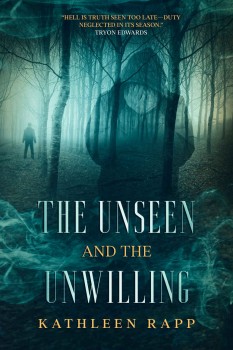 Never underestimate the destructive power of strategic ignorance. Covering the death of a prominent Washington VIP, ace reporter Finn Reese stumbled upon the Coalition, a disparate group of totalitarians who shared one goal—the eradication of the Land of Liberty. Skulking around America’s corridors of power with impunity, this insidious cabal proved to be more deadly in the shadows than any enemy the United States had faced on the battlefield. With the country now blindly teetering on the brink of extinction, Finn had to sound the alarm before it was too late. His major hurdle was convincing those in and out of government that this Machiavellian foe even existed. If he couldn’t cut through the buzz of the chattering classes, “the shiny city upon the hill” would be lost forever. Success seemed impossible, but Finn had to try.

A complex and timely political thriller, The Unseen and The Unwilling explores the characters’ internal conflict between their personal agenda and their sense of duty, once alerted to America’s downward journey toward the land of the less free.