The Uniform by Jodie Lawrence 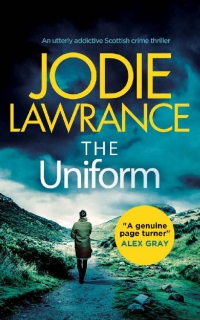 SHE’S OUT OF UNIFORM BUT SHE’S STILL IN THE LINE OF FIRE.
Helen Carter has just landed her first case as a detective: a murder in an abandoned cinema. A mysterious clock-like symbol is drawn on the wall . . . in blood.
Stranger still is what the killer left behind: the business card of an ex-cop.

Since being promoted from WPC, Helen is having trouble making her mark in the male-dominated Edinburgh CID, working under Inspector Jack Craven. He’s not happy about having a woman on his team. Witnesses won’t talk to her, her colleagues don’t take her seriously.
And now a body turns up in a sweet shop with a pocket watch shoved in his mouth.
The clock is ticking to stop a serial killer.