The Twisted Forest by J.F. Danskin 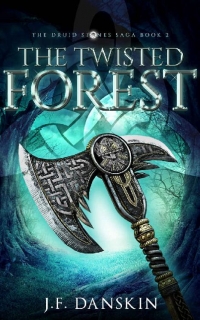 Malevolent magic rises in the forest. Will Donnell’s own growing powers be enough to meet the threat?
It has been a few months since the Battle of Cardhu. Donnell is preparing the villagers, anticipating further incursions from the Norse encampment on the coast. But the attacks, when they come, are from Donnell’s beloved forest. What is causing normally peaceful beasts to behave in this way? Who is equipping the boggles with bows?

Healer Fenella wants to retrieve the stolen white stone of Lugh. Balance won’t be restored until her circle of druids is reformed. Donnell is torn – Cardhu is vulnerable. The stone lies in the hands of the enemy Iohric: retrieving it will be a perilous mission. But when they find out what he intends to do with it, there doesn’t seem to be much choice at all.