The Tower of Fools by Andrzej Sapkowski 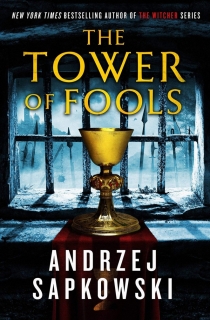 Andrzej Sapkowski’s Witcher series has become a fantasy phenomenon, finding millions of fans worldwide and inspiring the hit Netflix show and video games. Now the bestselling author introduces readers to a beloved new hero on an epic journey in The Tower of Fools, the first book of the Hussite Trilogy.

Reinmar of Bielawa, sometimes known as Reynevan, is a healer, a magician, and according to some, a charlatan. When a thoughtless indiscretion forces him to flee his home, he finds himself pursued
not only by brothers bent on vengeance but by the Holy Inquisition.

In a time when tensions between Hussite and Catholic countries are threatening to turn into war and mystical forces are gathering in the shadows, Reynevan’s journey will lead him to the Narrenturm — the Tower of Fools.

The Tower is an asylum for the mad…or for those who dare to think differently and challenge the prevailing order. And escaping it, avoiding the conflict around him, and keeping his own sanity will prove more difficult than he ever imagined.