The Tin Soldiers by T.W.M. Ashford 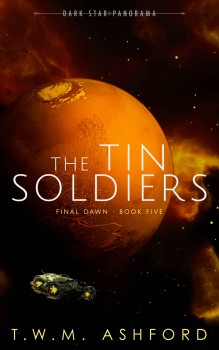 Clockwork soldiers are on the march, and time is running out.

Jack Bishop has been in self-imposed exile ever since the failed colonisation of New Eden. But when galactic chaos threatens the automata’s chances of ever being treated like equals, Jack has no choice but to follow the crew of the Adeona back into danger again.

A decommissioned factory is mass-producing mechanical soldiers, and nobody knows why. Rogan and Tuner are sent to check. But what starts as a routine inspection soon evolves into a murderous conspiracy that threatens to fracture the Ministerium forever.

Jack wanted to hide from the galaxy. Now his crew’s the only one that can keep it from tearing itself apart.