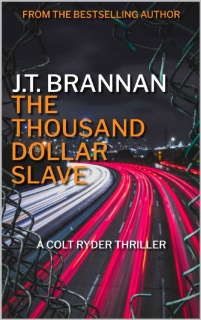 Ex-US Army Ranger and vigilante-for-hire Colt Ryder finds himself in the concrete jungle of Pittsburgh, where – along with his fearless canine companion, Kane – he is hired for a job that will test his mettle to the utmost.
Grant Turner was a journalist working on an exposé of the local sex trade, detailing horrifying examples of the human trafficking that goes on in the city; but when he got too close, his body ended up in a dumpster, and the story never saw the light of day.

But Turner’s girlfriend is determined to make sure that someone follows up on his work, and – unable to get help from the police – she turns to Colt Ryder, the Thousand Dollar Man.
But as Colt investigates the sickening business, he is not doing it for a newspaper story; because as he meets some of the victims, as he begins to understand how many more young women – even girls – are being exploited, he instead sets out to dismantle that trade, piece by bloody piece.