The Takers and Keepers: Where do the disappeared go? by Ivan Pope 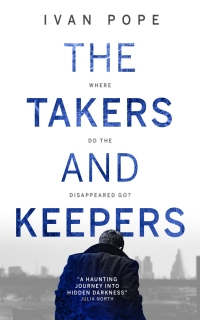 Where do the disappeared go? The girls and women who vanish, seldom to resurface. Allen Kimbo, a freelance reporter, believes there is a network of men who guard their “taken” and keep the silence that surrounds such deeds.

An email lures him to Eastern Europe, to a meeting of the Takers and Keepers. His girlfriend, Emily, pleads with him not to go. In Belgrade more is revealed than he had thought possible. Back at home, Emily is missing.