The Suicide Killer by Zach Lamb 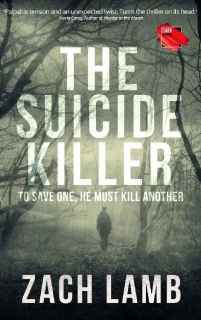 One soul for another. Two deadly secrets. A game begins.
Bobby Cotton’s mundane life is interrupted when he finds a dead body in Rusted Lakes Park. He is drawn to the girl for reasons he doesn’t understand and decides to hide his discovery from everybody.
When the dead girl speaks to Bobby, he sees it as his responsibility to protect her but ends up in an unusual love triangle. As she deteriorates, he must find new vessels for her to inhabit – or risk losing her forever.
Detective Gregory Burns wakes to a routine murder investigation, but when the killer contacts him, promising there will be other victims, Greg realizes there’s nothing routine about it. Burns’ home and work life blur as he tries to catch the killer and keep the secret phone calls from his wife and his colleagues.
Bobby’s descent into madness and Greg’s quest to solve the case no matter the consequences collide in a game only one can win.