The Suicide Club by Andrew Williams 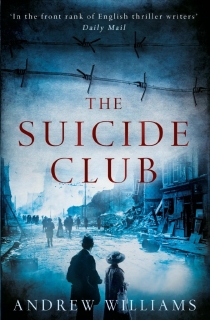 For all readers of Robert Harris, William Boyd and John le Carre, The Suicide Club is a First World War spy thriller set in Occupied Belgium in 1917, and tells the dark, disturbing and untold story of the shadow espionage battle fought behind the lines.

August 1917.
Britain is mired in bloody stalemate on the Western Front and questions are being asked in government about the leadership of the army.
Soldier spy Sandy Innes is summoned from his undercover work in Belgium by the new Secret Service to investigate.
Officially transferred to Field Marshal Haig’s headquarters in France to prepare agents for the next big push, his secret mission is to spy on Haig’s intelligence chiefs.
At GHQ, no one is interested in Innes’s inside knowledge.
Instead, he is attached to an advance assault group dubbed ‘The Suicide Club’.

His fellow intelligence officers have little faith in the top secret information being fed to Haig by their superior, and as Innes digs deeper he begins to suspect treachery.
The stakes could not be higher – the fate of hundreds of thousands of British soldiers.
In a tense race against time, against the background of political machinations in government and at GHQ, Innes must survive membership of The Suicide Club, and then risk all by going back behind enemy lines to uncover the truth.