The Stranger by Simon Conway 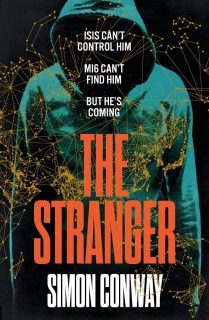 ISIS can’t control him. MI6 can’t find him. But he’s coming…
Things change quickly in the world of espionage and clandestine operations. Jude Lyon of MI6 remembers the captured terrorist bomb-maker. He watched him being flown off to Syria, back when Syria was ‘friendly’. No-one expected him to survive interrogation there. Yet the man is alive and someone has broken him out of jail.

Bad news for the former foreign secretary who authorised his rendition. And Jude’s boss Queen Bee who knew he wasn’t a terrorist at all, but an innocent bystander. Now she calls Jude back from a dangerously enjoyable mission involving a Russian diplomat’s wife. He has a new job: close down this embarrassment. Fast.

But embarrassment is only the beginning. Someone is using the former prisoner to front a new and unspeakably terrifying campaign. Someone not even ISIS can control.
He is like a rumour, a myth, a whisper on the desert wind. But he is real and he is coming for us …He is the genius known only as …The Stranger.

From the corridors of Westminster to the refugee camps of Jordan, the back streets of East London to the badlands of Iraq, The Stranger is a nerve-shredding journey of suspense as Jude Lyon pieces together the shape of an implacable horror coming towards him – and a conspiracy of lies behind him.