The Stranger Behind You by Carol Goodman 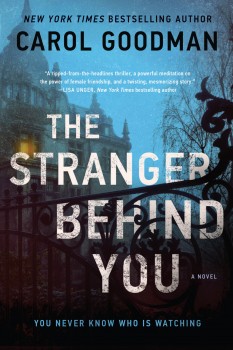 You’re never really alone
Journalist Joan Lurie has written a seething article exposing a notorious newspaper tycoon as a sexual predator. But the night it goes live, she is brutally attacked. Traumatized and suffering the effects of a concussion, she moves into a highly secure apartment in Manhattan called the Refuge, which was at one time a Magdalen Laundry. Joan should be safe here, so how can she explain the cryptic incidents that are happening?

Lillian Day is Joan’s new 96-year-old neighbor at the Refuge. In 1941, Lillian witnessed a mysterious murder that sent her into hiding at the Magdalen Laundry, and she hasn’t come out since. As she relates to Joan her harrowing story, Joan sees striking similarities to her own past.

Melissa Osgood, newly widowed and revengeful, has burning questions about her husband’s recent death. When she discovers a suspicious paper trail that he left behind, she realizes how little she knew about her marriage. But it seems Joan Lurie might be the one who has the answers.
As these three lives intersect, each woman must stay one step ahead of those who are desperate to make sure the truth is never uncovered.