The Stone Eater by Jo Hamilton 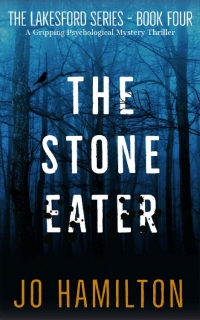 Two down, three to go.
Experienced hunters, the Sorenson brothers stumble across a dead body slumped across Widow’s Bridge, a bridge with a haunting history. The body is ex-mayor of Lakesford, Chad Naylor, found in the middle of nowhere, miles away from his home, with a bullet hole in his chest and a small stone in his mouth. The stone has the number 1 marked on it.

The next body to be found, stone number 2, Lakesford businessman Rick Shepherd, is also found far from his home.
Sergeant Louise Ratahi receives a tip off that there is a list. A list of five people that will die. Two down, three to go. Ratahi must hunt down the killer before it’s too late. However, the reason that these particular people have been targeted begins to become apparent.