The Stone Chamber by Kate Ellis 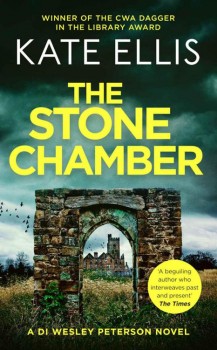 On a summer evening, Robert and Greta Gerdner are shot dead at their home in the Devon countryside.

DI Wesley Peterson suspects the execution-style murders might be linked to Robert’s past police career – until Robert’s name is found on a list of people who’ve been sent tickets anonymously for a tour of Darkhole Grange, a former asylum on Dartmoor.
Wesley discovers that other names on the list have also died in mysterious circumstances and, as he is drawn into the chilling history of the asylum, he becomes convinced that it holds the key to the case.
When his friend, archaeologist Neil Watson, finds the skeleton of a woman buried in a sealed chamber dating back to the fifteenth century at his nearby dig, Wesley wonders whether there might be a connection between the ancient cell and the tragic events at Darkhole Grange.

With the clock ticking, Wesley must solve the puzzle, before the next person on the list meets a terrible end . . .