The Sterling Directive by Tim Standish 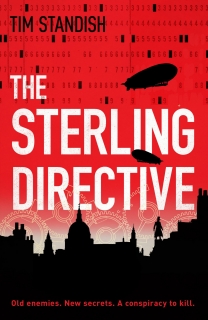 Captain Charles Maddox returns secretly to London from an exile in disgrace only to be arrested, imprisoned and threatened with the death penalty. He is rescued by a shadowy government agency called the Map Room who give him a choice: return to prison or become an agent, codenamed Sterling, and help them uncover a government conspiracy connected to the Ripper murders.

Led by the coolly calculating Milady and her associate Collier, and aided by fellow agent Church and mechanical computer expert Patience, the freshly appointed Agent Sterling must rapidly learn his new trade if he is to survive the murky and violent fringes of Victorian life and uncover a secret that threatens the Empire itself.