The Stars Wait Not by Anne Wheeler 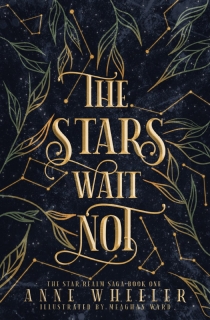 Ryllis Camden has a secret—she can talk to nature, and it speaks to her in return. But her gift is forbidden by the Vilarian Star Realm who controls her planet, and the penalty is death. When she’s falsely accused of treason and exiled to the Vilarian home world, hiding her power becomes even more critical. But how can she hide anything when she’s forced to toil in the home of the emperor’s youngest son?

Kresten Westermark might be a prince, but long ago he shunned a life of luxury to work as a telepath in the Vilarian Imperial Fleet. His job demands he treat his new prisoner as a slave and test his deteriorating telepathic powers on her, but the only thing on his mind is the growing attraction he feels toward the earnest young woman tending his gardens.

As the mountain winter fades, a reluctant respect between the two becomes trust, and trust soon blossoms into affection. But when the Fleet arrives to arrest Kresten for treason, Ryllis must make an impossible decision.