The Spider and the Scribe by Morgan Stang 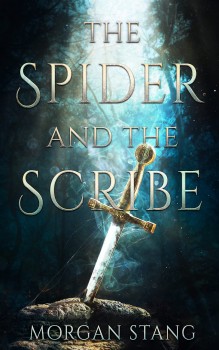 As far as Harriette Cooke is concerned, a little lie or two never hurt anyone.
A down-on-her-luck scribe and the sole provider for her family, she struggles to get by in a city that turns a blind eye to the poor. Her finances are squeezed to the breaking point when she stumbles across the impossible on the side of the road: a chest full of gold coins.
The fortune could completely change Harriette’s life. The problem? It’s a lost provincial tax payment meant for the King. Throughout the city, the search is on for the missing money, and everyone is closing in on Harriette.

On one side is the lord of the city, Count Gainsbury, and the cruel City Watch at his disposal. On the other side is the Cobbler’s Guild, a band of ruthless cutthroats led by a madwoman who will stop at nothing to claim her prize. And complicating things is the arrival of Royal Inquisitor Samara Adia, an investigator sent straight from the King to put his affairs in order with the help of her infamous bodyguard, the Misfit of Kantor.
Trapped in a web of deceit, all clues lead to Harriette and her friends. If they want to get out of the city alive—and rich—they have only their wits to rely on…and perhaps a little lie or two.