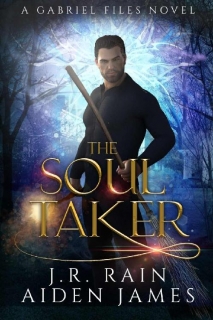 Residing in the quaint but quirky town of Denmark, Tennessee, the semi-immortal ‘Gabe’ is called upon from time to time to assist local law enforcement in solving unusual crimes that often end in murder. And, by unusual, the crimes always involve something he’s quite familiar with:

When Sheriff Billy McCain comes calling for help in solving the brutal slayings of a pair of homeless men, whose corpses have been marked by a dark snake and scythe symbol beneath the napes of their necks, Gabriel eagerly accepts the challenge to help solve the case and bring the killer, or killers, to justice.

But the assignment comes with a terrifying caveat… the mark left upon both victims points to an ancient entity that rarely visits our world. Known in Gabe’s Romanian homeland as the Sufletul, or Soul Taker, in the previous centuries this immortal fiend has arisen, it has left widespread death and destruction in its wake.

The initial killings soon begin to multiply, and the mysterious reasons behind why this ancient menace has chosen the tiny town of Denmark begin to come into focus for Gabriel.

Relying on his investigative instincts and courage, as well as precious insights from trusted friends and his family of witches and warlocks, the quest to stop the growing body count before it erupts into uncontrolled carnage brings Gabriel closer and closer to a confrontation with… The Soul Take.