The Solstice Countdown by Lisa Shearin 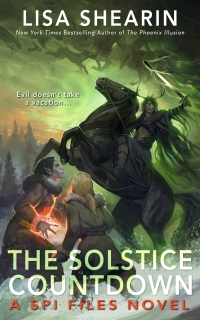 As an agent of Supernatural Protection & Investigations (SPI), I know that evil doesn’t take a vacation, but this time it made an exception and followed me on mine.

Weird Sisters is a small town in the North Carolina mountains that was built on a network of ley lines that magnify psychic and paranormal energies. It doesn’t show up on Google Maps, was named after the three witches in Macbeth, and the first word of the town name perfectly describes most of its human and supernatural citizens.

A stranger has come to town, bringing with him a dormant source of primordial evil. Soon, magically gifted locals start vanishing, and the power of the ley lines is turned against us, cutting us off from the outside world and any source of help.

For a town and its people steeped in magic, and my family sworn to protect both, it’s a race against time to use a local winter solstice phenomenon to free the town from its prison. But first, I must trust a father I’ve never known to fight and defeat an awakening evil that’s existed since the beginning of time. If we fail, and it is unleashed, the world will not survive.