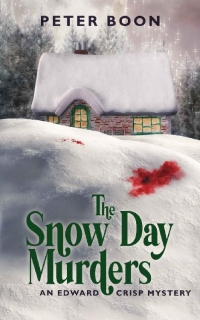 Everyone loves a snow day… don’t they?
Schools and workplaces closed, replaced by a magical winter wonderland where anything can happen. This is especially exciting in the beautiful seaside village of Chalk Gap, nestled between the majestic snow-covered cliffs of the South Downs.

But when an unprecedented snowfall cuts the tiny village off from everywhere else, and the first body is found, the snow day takes a sinister turn.

With no one able to get in or out of Chalk Gap, the murderer must still be in the village. But with the police also unable to access the scene, school librarian Edward Crisp must step up once again with limited help.
Can mystery expert Edward and his enthusiastic teenage assistant, Noah, plough through the secrets, lies and red herrings to solve The Snow Day Murders?
And can YOU?