The Skeleton Lake by Andrew Lowe 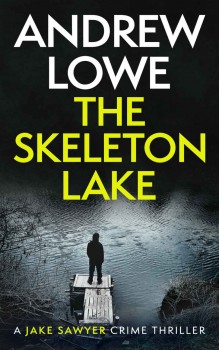 A detective who can’t forget.
A killer who won’t forgive.
DI JAKE SAWYER is in hiding. Wanted for questioning after a death in his custody, he is lying low, forming a plan to clear his name.

When the body of an elderly man is discovered in his home, horrifically brutalised, Sawyer suspects the crime isn’t quite what it seems.

As more victims come to light, Sawyer races to apprehend an insatiable killer with a sadistic streak. But he’s also being targeted by devious new enemies, tasked with flushing him out and taking him down.

With his pursuers closing in, Sawyer discovers a family secret which uncovers the true horror behind the murders. But to catch the culprit, he must delve deeper than ever into his personal trauma, and finally make peace with the past.

Set within the bleak beauty of the UK Peak District, this pacy British detective novel is a murder mystery with twists, dark humour and a compelling lead character whose backstory continues through the series.