The Silent One by M K Farrar 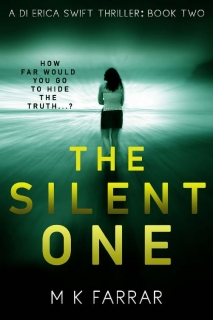 How far would you go to hide the truth?
A student murdered.
A professor arrested.
A teenager with a secret…
In the halls of residence of an East London university campus, eighteen-year-old Paige Arland wakes to a bed full of blood and no memory of how it got there.

DI Erica Swift’s life has been turned upside down after her encounter with the killer known as The Eye Thief, but when she gets the call alerting her to a body found on a university campus, she’s determined not to allow her grief to affect her work.

The killing is brutal—a young man with his whole future ahead of him—and it’s up to Erica and her team to find the person responsible.
But someone’s not talking.
When another student’s body is found, Erica finds herself in a race against time to stop the killer…