The Signature Killer by Dan Whitesnow 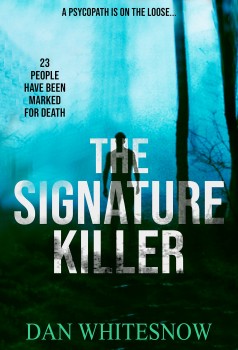 When female banker Anne Holmes is discovered to have been sexually assaulted and murdered in her home, with the weird inscription SCENE ONE embedded on the right side of her buttock, it sent a horrifying scare around the entire town of Rock Hill, South Carolina. Homicide detectives John Nero and Nancy Bates are assigned to the case.

Then, another female is suddenly found dead almost in the same fashion in Mecklenburg, North Carolina. Now it was evident that a vicious sexual predator and serial killer is on the loose. Everyone is warned to double check their doors at night.

But when the third victim happens to be a wealthy female politician from Charlotte, it becomes apparent that the serial killer has no boundaries in perpetuating his evil crimes. And now, Detective John Nero and Nancy Bates must stop him before he kills his very next victim, who happens to be the daughter of a very important man.