The Sightless City by Noah Lemelson 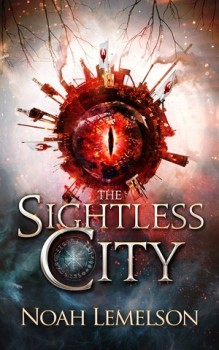 Those are only the tip of the iceberg when it comes to actions some will take to protect their interests in æther-oil, the coveted substance that fuels the city of Huile.
As both veteran and private investigator, Marcel Talwar knows this firsthand, and he likes to think he’d never participate in such things. However, that naïve idea comes to a crashing end when he takes on a new case that quickly shatters his world view.

A trail of evidence points to someone in Marcel’s inner circle who’s using him as a pawn to conduct grisly experiments-experiments that could lead to genocide.
Now, Marcel is more determined than ever to discover who’s pulling the strings to this sinister plot. But the further he gets, the larger the target on his back becomes, and it’s not long before Marcel has to ask himself how much and how many he’s willing to sacrifice to get to the truth.