The Shuffle by Dustin Stevens 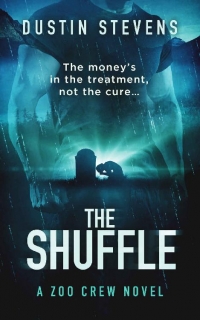 “The money’s in the treatment, not the cure…”
On the brink of the first official weekend of summer, Drake Bell’s agenda was set: Join his friends, The Zoo Crew, for a birthday celebration of one of their own. Take advantage of the slow period in the annual Missoula calendar, with classes at the university having wrapped and commencement just days away. Get outside and relish in all the warmth and adventure Montana has to offer.

Thoughts locked on his impending plan, he was completely unaware of the story unfolding just thirty miles north of town. The tale of a young man with deep ties of his own to the Crew, recovering from a painkiller addiction, found dead in a short-term rental. An apparent accidental overdose, the cause of death so clear it doesn’t warrant much of an investigation.

Emphatic there is no way her son would ever do such a thing, the young man’s grieving mother reaches out to the Crew. Imploring them to take a look, to put her conscience at ease, they reluctantly delve into what happened.

They soon uncover a plot far greater than any of them could imagine. A scheme skirting the edges of treatment and rehabilitation. Federal and local jurisdiction. Patient rights and basic humanity.
All in service of a sleight-of-hand game Drake never knew existed…