The Shooter by Peter O’Mahoney 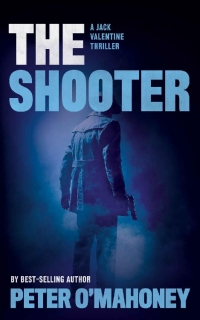 A serial killer is on the loose. The clock is ticking. And Jack Valentine is the only one who can stop him…
When high-profile lawyer Anthony Waltz is found dead in his apartment, the police conclude the death is a suicide. Hired by a friend of the deceased, private investigator Valentine digs deep into the lawyer’s past, uncovering a life full of accusations, lies, and violence. Exploring lead after lead, Valentine connects the death to other suicides throughout Chicago.

Following the clues, attacking sources, and muscling his way into a world of corruption, Valentine uncovers evidence that could expose a serial killer.
But to reveal a killer, to uncover the truth, Jack Valentine must risk it all…