The Sharpest Needle by Renee Patrick 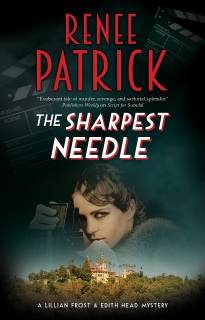 What happens when your past catches up with you? Lillian Frost and Edith Head investigate a series of bizarre poison pen letters sent to a leading Hollywood actress in this mesmerising mystery.

1939, Los Angeles. Marion Davies has a problem. The actress has received poison pen letters highlighting an embarrassing event in her past from the mysterious ‘Argus’. Can Lillian Frost and her friend and partner-in-crime, celebrated costume designer Edith Head, expose the writer before they expose Marion? Lillian’s boss, millionaire inventor Addison Rice, seems to think so, but when Lillian speaks to her idol, Marion is reluctant to reveal her secrets, fearful of jeopardizing her affair with newspaper tycoon W.R. Hearst.

Is a prankster simply trying to tarnish the reputation of one of Hollywood’s leading ladies, or is something more sinister going on behind the scenes? As Lillian and Edith are drawn into increasingly dangerous and disturbing territory, their enquiries take an unexpected and stunningly dark twist . . .