The Sentinel’s Heir by Nate Phelps 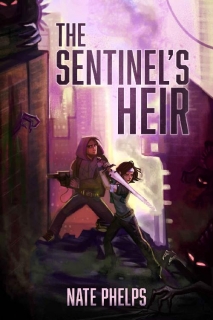 Romance.
Tacos!
Johnny’s been defeated, downtown is in ruins, and an invading army is approaching. Kleiner’s days of following Johnny and covering things in purple safety foam are over. It’s the worst-case scenario and no one is safe.
But they’re not giving up yet.

Kleiner joins forces with Sarah, a discharged Enforcer agent who’s been doing jobs in secret. They’ve enlisted the help of Leon, a do-gooder terrorist, and Ricky, the most knowledgeable taco vendor in the city. Together, they set out to save Midhaven. Or at least cover it in more purple goo.
Thirteen has twelve other lackeys that stand in their way and the clock is ticking before the monster that ended Johnny comes back and finishes the city for good.