The Seekers of Chashmal by Daniel Shatz 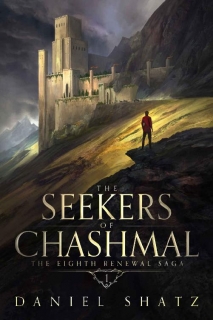 My name is Erlkind. I’m hiding in the sewers of Chasheer. They’re going to kill me soon.
I am still having the visions. Sometime in the next fifty years, there will be a great war in this country that will spread to the world. With the Chashmal nearly at the Council’s fingertips, this war will end in the death of thousands if not millions of people. And I showed it to them, fool I am!

Our absolution rests on the shoulders of Mahgs; people controlled by deities that have their own ambitions, goals, and personalities. My visions lead me to believe that there are six such people. A politician, a killer, an inventor, a lover, a merchant, and a murderer. But will these Mahgs save us? Or will they destroy us?
I hear their footsteps. I, will never know.