The Ruin of Snow by Lacy Sheridan 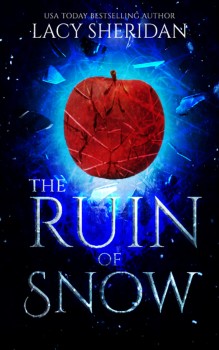 Every girl in the House Morningspell is born with the ability to enchant, to glamour, to manipulate her world without ever lifting a jeweled finger. Neyva is no exception. And like all Morningspell girls, Neyva was raised to kill.

But when doubt creeps in–and her family makes her expected place clear–she sees no option but to flee. They won’t be satisfied with her gone; they want her dead, and her sisters will stop at nothing to complete their new task. Lost in the unforgiving wilderness, Neyva’s only hope of survival is to ally with the cursed bandits who haunt the forest. Among them she finds clever, charming Kye, who seems to know all of Neyva’s weaknesses. Secretive and deadly, it’s a game of who trusts first. A game Neyva can’t afford to lose.

Because her secret is one that could ruin her.

One that gives her a choice between death and damnation, and there are people on all sides ready to make the choice for her.