The Risen Shard by D.K. Holmberg 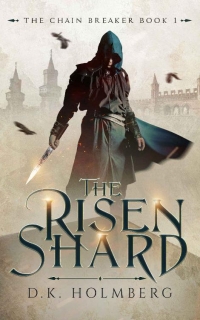 An assassin with no rival meets a magic he cannot defeat. The Chain Breaker Series begins.
Trained to kill from a young age, Gavin Lorren finally escaped that life. No more killing innocents. No more working alone. The jobs are still dangerous, but at least he can choose.

Now an old friend has invited him to the city of Yoran where the work is plentiful. The Roasted Dragon tavern is rough but cozy. The regulars are seedy but welcoming. The owner Jessica is fond of him. It’s almost too good to be true.

His good fortune is fleeting. Gavin finds himself facing a new enemy, fast and deadly El’aras warriors—an ancient race with innate magical talent. By the time he learns sorcery is involved, he’s in too deep. To succeed, he’ll have to uncover parts of his past that he’d hoped to forget.
It will take an assassin without equal to survive.
It will take the Chain Breaker.