The Rightful Queen by Isabelle Steiger 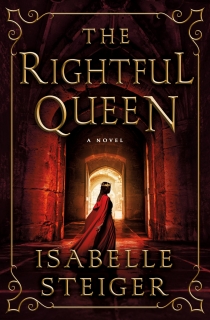 The second book in Isabelle Steiger’s epic fantasy series, which weaves together the lives of the haves and the have-nots-both desperately fighting to reassemble the remains of a fallen empire.
The Rightful Queen returns readers to the territories of Lantistyne. Imperator Elgar has brought war to the continent once again, and the rogues of the Dragon’s Head, once forced into his service, are scattered to the winds, wracked by tragedy and struggling to reunite.

While a cornered King Kelken grows increasingly desperate, Arianrod Margraine, the brilliant but outmanned marquise of Esthrades, devises a plan to stretch Elgar’s forces thin and turn the tide of battle in their favor. But when the sheltered queen of Issamira is driven from her throne by a long-simmering plot and the use of forbidden magic, Arianrod faces an even more pressing crisis.

Adora Avestri is more than the rightful queen of Issamira, more even than the key to defeating Elgar on the field-she has drawn the attention of beings older than Lantistyne itself, who possess hidden knowledge Arianrod has long desired. But if the queen and the marquise hope to survive long enough to learn it, Adora must find the strength to claim her birthright once and for all, and Arianrod must match wits and magic with a foe she has never before encountered: an equal.
The Rightful Queen is another example of Isabelle Steiger’s powerful writing, full of intricate characters and complex world-building.