The Revenge We Seek by Meg Jolly 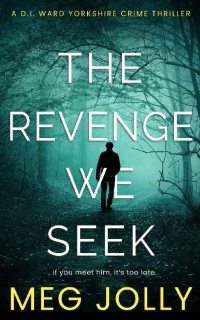 One dead, one missing, one in danger…and they’ll never catch him.
When a woman is found brutally murdered just outside the quiet town of Bingley, DI Daniel Ward and his team lead the case. The ex-boyfriend with an anger problem is an obvious suspect, but this case isn’t as open and shut as DI Ward would like when the forensics delivers a twist he wasn’t expecting.

In the middle of the autumn burglary season, with the Varga case still running rings around them all, and his personal life in tatters, an unsolved murder is the last thing Ward needs the DCI breathing down his neck on. Pulled in all directions, the HMET team stretches far too thin—and who is going to slip between the cracks?

Another woman vanishes—but by the time Ward and his team connect the two cases, it’s a race against time to stop a power-hungry killer hell bent on revenge from striking again.
But how can DI Ward find a murderer who lives in the shadows, behind an ordinary face?