The Quiet Edge by Rob Cornell 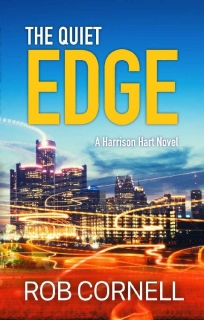 No good deed goes unpunished.
For private investigator Harrison Hart that’s more than an old cliché—it’s his current damn life.
After giving up his FBI career to care for his mentally ill brother, Harrison does his best to adjust to life in suburban Detroit. The last thing he needs is somebody else’s problems. But when he sees a lowlife grab a woman’s purse and run, what can Harrison do but chase him down?

This one act of heroism draws Harrison into a messy crossfire of deceit, betrayal, and ruthless criminal ambition, where not even the victim of a purse-snatching can claim innocence.

In the fallout, Harrison reluctantly plays good Samaritan once more, though it means mixing with crafty Detroit gangsters, crooked politicians, and the bottom-feeders living off their scraps. This time, instead of chasing down a purse, he must race to save a woman’s life and pull the Motor City back from the edge of a simmering mob war.