The Queen of Izmoroz by Jon Skovron 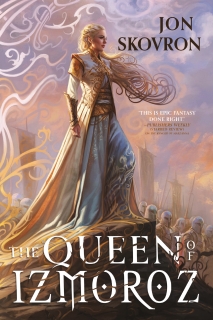 Sonya has brought a foreign army to free her country from imperial rule, but her allies may have other goals in the second book of this thrilling epic fantasy trilogy from Jon Skovron.

The first battle is over, but war yet looms on the horizon. Sonya and her allies–the foreign Uaine and their armies of the undead–have beaten the imperial soldiers and ousted them from Izmoroz.

Now they have the rest of the empire to free. Meanwhile, betrayed by his sister, his homeland, and his fiancé, Sonya’s brother the famed wizard Sebastian has retreated with the imperial forces. But another traitor is waiting in the capital, and enemies of the throne may hide in plain sight…