The Quantum Enigma by T.R. Harris 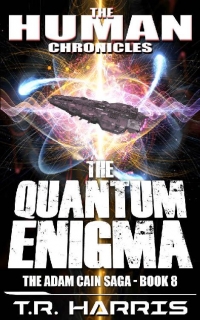 Mysteries and mayhem are abundant in the Dead Zone, keeping Marshal Adam Cain and his deputy, Riyad Tarazi, hopping from one crisis to another.
Everyone has secrets, but not everyone is prepared to keep them hidden. With a hundred Dead Worlds laid bare, some of those secrets are becoming known, and the resulting scandals are throwing the Dead Zone into turmoil.

Once again, the Zone has become a boiling cauldron of intrigue and high tension. But this time, there could be no stopping the conflict that has been brewing in the region for years. In the eyes of many, war may be the only solution, unless…

…unless Adam can navigate the fine line between good and evil and solve his greatest mystery. But this time our hero may have met his match when his enemy is everywhere… and nowhere … at the same time.
Adam Cain has seen some weird shit in his day, but nothing like The Quantum Enigma.