The Promotion by Daniel Hurst 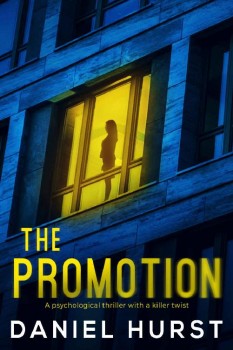 What if your worst enemy discovered your darkest secret?
Imogen should be enjoying her life – she is happily married with a high-powered career that could see her rise to the very highest levels of management.
But that’s never going to happen. Because Imogen’s boss Michael has discovered she has a secret, something she has hidden from everyone, even her devoted husband. And if it’s ever revealed, her life will be destroyed.

Which means Imogen is completely and utterly in Michael’s power.
And he loves it – he works her 24/7 and takes all the credit; he invents tedious assignments to fill her weekends; he is openly dismissive and disrespectful. It seems like every week he comes up with some new way to torment her, to make her life a living hell.
And Imogen can’t see any way out – because Michael has told her if she ever tries to leave her job he’ll tell the world what she’s done and her life will be over.
As she becomes more and more desperate, Imogen begins to think the unthinkable. Maybe there is a way to solve the Michael problem – permanently.