The Power Of a Connected by Andrew Sharp 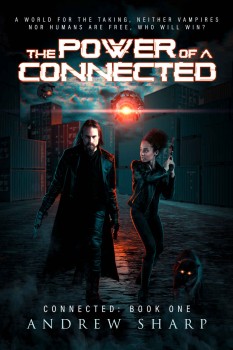 The human population on the planet Devil’s Rock have been isolated from Earth for so long they do not recall its existence. They carve out meagre livings inside huge, enclosed citadel stations to protect them from the tainted air and mutations outside.

Scallion, a petty thief, needs to escape his station, a feat considered near impossible. His situation binds him by circumstance to Sara, a young woman, who has been kidnapped. Sara is a Connected and the most powerful Connected ever known. She has the ability to unlock long-dormant alien technology.

So Scallion’s and Sara’s adventures begin, taking them from one perilous situation to another.

To survive, they must unravel past secrets and survive the vampiric race that occupies the lands outside the citadel stations.