The Pot Thief Who Studied the Woman at Otowi Crossing by J. Michael Orenduff 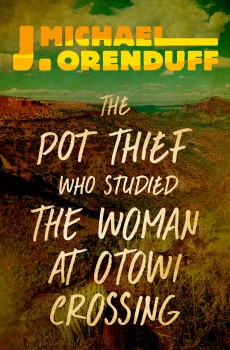 Hubert Schuze is an adjunct professor at the University of New Mexico in Albuquerque, and he has a fairly lucrative side gig digging up ancient relics and selling them. He also seems to have a talent for finding killers. When Hubie discovers a body outside his pottery shop, it appears the victim was stabbed in the back with something resembling a screwdriver. But the story gets a lot more mysterious when a video turns up showing the man collapsing with no one else nearby. Furthermore, a slip of paper is found in his pocket, with Hubie’s name and address on it, suggesting there may be a connection between the two men-though Hubie has no idea what it could be.

Now, the professor and pottery expert must put his sleuthing skills to work-while simultaneously managing his new role running the university’s art department-to piece together the shards of a baffling crime.